The final day of the 20th Siargao National Surfing Cup was one full of tense excitement. Bets were drawn and the crowds were wowed as both Juniors and Men’s Open finalists displayed their surfing prowess at a pumping Cloud 9. 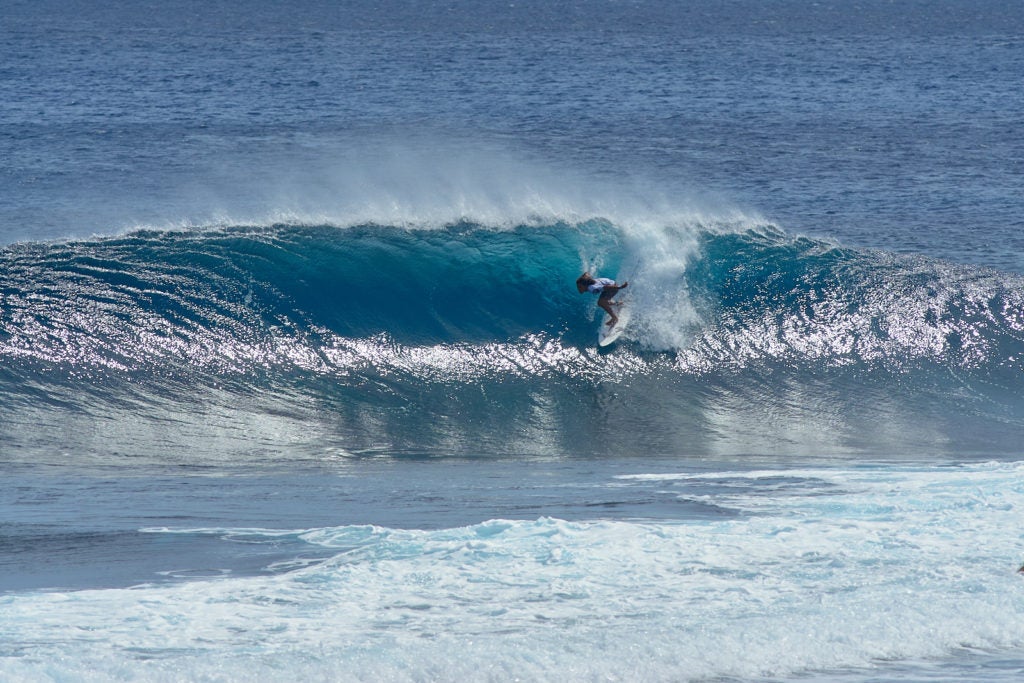 Marama Tokong on his signature drop on a barreling wave in Cloud 9 during finals. Photo by Oli Bayer

No stranger to winning, these two seasoned surfers made it clear to everybody their mastery of majestic Cloud 9. Whether it was 6-foot or 3-foot waves, Alcala and Tokong gave the crowd and the judges the show that they were looking for.

“I’m so stoked! I’m glad the waves were firing during the finals and that I was able to get some good barrels!” said an ecstatic Tokong after finishing the final heat.

“I tried to go even deeper because I wanted to win but as you saw, I got quite a lot of wipeouts in this heat but then I also got a 9.75 score on one wave and that was awesome!” Tokong adds.

“I’ve really been training hard, especially if I know there’s a competition. I want to get better and better,” Tokong said. “I also want to be a good role model for the kids here. They’re the future—the future of surfing and the future of Siargao.” he adds

Tokong shares how wonderful it is to have PSCT bring Philippine surfing to a whole new level by adding the Juniors Division to each of their legs, starting with the Siargao National Surfing Cup.

“Now kids can get to see how professional surfing is done and if they start young like me, who knows how far their potential can go?” Tokong continues.

The Juniors Division final heat comprises of Gabriel Lerog, Benjomar Canon, Noah Arkfield, and Marino Figuron. It was interesting to see the competitive spirit of these young surfers fearlessly ride wave after wave, not leaving anything to chance.

At the onset, it was Lerog leading until Canon was able to score a 6.50, upsetting Lerog’s lead. In an attempt to regain the lead, Lerog grabbed every chance to barrel left-handers but Canon didn’t make things easy for him as he too would use his priority by riding almost the same waves that Canon did. These two young Siargaonons were seen riding both ends of pumping Cloud 9 making the crowd go wild each time they’d be seen shooting out of the barrel.

A lack of completed rides caused Lerog to lose the lead while Canon earned a total heat score of 11.75 making him the first ever Siargao National Surfing Cup Juniors Division Champion.

“I’m happy to have made it to second place even if I didn’t win the championship,” a soft-spoken Lerog said. “I tried defending my position with my priority but he was able to get really good waves,” he adds.

The crowds were flocking to the boardwalk when Canon arrived, carried on the shoulders of older Siargao surfers. Still catching his breath and the fact that he won, Canon was thankful for the win.

“I’m just really thankful to everybody, to PSCT for having the Juniors Division and especially to my sponsors who made it possible for me to be here,” he adds.

Here is the list of winners for the 20th Siargao National Surfing Cup:

With the first and opening leg of the PSCT done. Everybody’s looking forward to the next leg in Lanuza, Surigao del Sur this November 18-24, 2018. Unlike Siargao’s Cloud 9 which is a reef break, Lanuza’s Doot Poktoy is a rivermouth and beach break. A completely different spot with another set of locals claiming prowess over their home break. It could be anybody’s game.

Will our Siargao rippers be versatile enough to win this leg or will we see Lanuza locals claim the top place? Stay tuned to find out.

This event is organized by the PSCT and United Philippine Surfing Association (UPSA).