We all know how grim the news is right now.

Whether you’re a news junkie or just someone who logs on Facebook every day for memes, it’s nigh-on-impossible not to come across headlines about inflation rate, the high number of rape cases, Presidential Communications Operations Office (PCOO) Assistant Secretary  Mocha Uson’s resignation , the anti-drug war and so much more.

While others find these significant events stressful, there are also some people who would rather shrug their shoulders — a strategy we refer to as “coping mechanism.”

In the face of great adversity, we Filipinos often use the emotion-focused coping strategy. Ranked as 3rd happiest nation in the world, we have mastered the art of keeping up a positive disposition.

We take things lightly and even laugh at jokes despite the gravity of the situation. While this cultural trait is what made us strong as a nation, this has also developed an attitude of apathy among us.

Today, cracking “insensitive” jokes has been an ordinary part of the usual conversation — in schools, in the streets, at work and of course, on television. American actor and humorist, Will Rogers, once said: “Everything is funny as long as it’s happening to somebody else.”

One reason why we laugh at tragedies is because we make ugly truths easier to deal with, which leads to a desensitized society.

In 2013, comedian Vice Ganda got criticized for tagging news anchor Jessica Soho as target for a gang rape joke. From being a respected journalist to a laughing stock, the joke was then followed by cracks about Soho’s weight.  Though it was part of a segment that also made fun of other celebrities, Soho pointed out that trivializing rape isn’t just cruel, but a crime as well.

Not only that, in 2017, another insensitive joke caused an outrage among netizens. “Eat Bulaga” host Joey de Leon drew flak on social media after saying that the “Juan for All, All for Juan” contestant was just making up her depression.

And now, actress Alex Gonzaga was caught in hot water after a netizen called her out by allegedly cracking an insensitive “drug addict” joke. In a Twitter post, Jericho Rayel Timbol highlighted a particular scene where Gonzaga was making fun of drug addicts, despite the alarming number of extrajudicial killings related to the administration’s war on drugs.

This is a clip of the Cubao Expo vlog of Alex Gonzaga. This is so insensitive on so many levels especially now that the government is out there killing people tagged as drug users. Second, hindi siya funny. Hindi nakakatawang pagbintangan kang adik. pic.twitter.com/wX5PH4mmmp

The tweet seemed to have reached Gonzaga, prompting her to issue an apology: 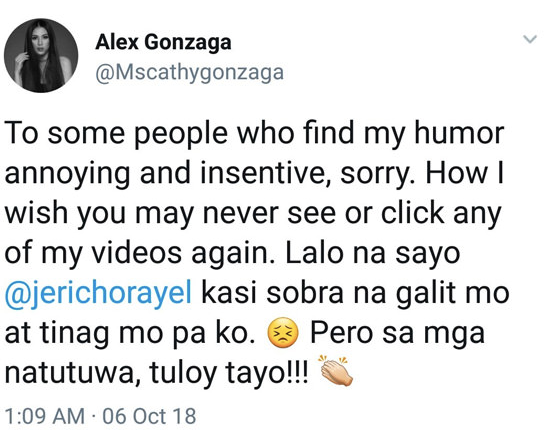 But the apology was later deleted after confirming that they were able to sort things out through direct messaging on Twitter.

I’ve been messaging the guy who tagged me sa DMs kagabi pa. We have good conversation explainning our sides. I like your tweet. Sometimes when we criticize we should not use negative words so we don’t invite negativity as well.☺️ https://t.co/f8dW4ahMW6

Despite the negative comments on her actions, Gonzaga still believes that her joke is not for everyone.

“Ignorance is bliss,” sometimes we feel comfortable when we don’t know anything about certain things. For some, rape jokes are okay as long as it’s not their daughter; Martial Law has become a laughing matter because “we never experienced it”; and why worry about the rampant drug killings if you’re not a drug addict?

Whether we are confronted with political or social issues, the first thing that we would do is laugh about it. Ridicule those who get easily “offended” and call them party poopers just because they take things seriously.

It’s not wrong to throw out jokes, but there will always be some things that can never be justified as a joke. It’s not about being easily offended, but more about being sensitive and aware about certain issues. Remember that just because it’s not happening to you doesn’t mean it’s not happening at all. In the age of information, ignorance and insensitivity is a choice.

We may not be able to correct these sick jokes, but we can always help in educating them.