India seems to be one of the most least likely places for an innovative winery to emerge, but that is exactly what happened at Hong Village, a tribal community hidden away in the country’s Northeast region. Naara-Aaba, which was launched only last October 2017, is India’s first and only organic kiwi wine. It is also one of the few wineries in the world that bottle this unusual and tangy concoction.

Tage Rita Takhe, the 37-year-old founder of the winery, came up with the idea as a solution to a local problem. Kiwi is abundant in the Arunachal Pradesh region—especially in the lush UNESCO-shortlisted Ziro Valley, where the Hong community lives. The fruit is also very popular among Indians for its immunity boosting capabilities and other nutrients. Despite this, local farmers struggle to compete with imported fruits because most people think they are a lot tastier than the locally-grown ones. Millions of kiwis are shipped to India from New Zealand, Italy, and Chile each year—anywhere from 40,000 to 60,000 tons. As a result, large numbers of local produce go to waste. 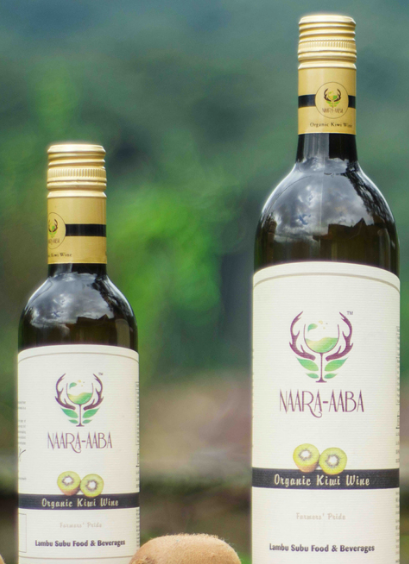 “The fruit is abundantly available in our place. Kiwi farmers are unable to explore its full potential as a raw fruit in terms of market and price. Making wine was the best option to preserve its nutritive values,” Tage Rita Takhe said.

“Drinking wine is a tradition in tribal culture but preserving the drink for a long duration was not possible because of lack of modern methods of brewing wine. Our kiwi wine is a solution to this gap between tradition and technology,” she added.

How does it taste? Here’s what writer Ariel Sophia Bardi has to say:

“The tart sweetness of the fruit carries over to the drink. Fans of crisp, high-acid wines will probably find it similar to a drier Riesling—a suitable accompaniment for Arunachali cuisine. Anyone eager for a sample can try a glass with a home-cooked plate of local staples, such as fried bamboo shoots, fire-roasted chicken, and jungle-foraged greens. ”

It took Takhe and her husband six years of in-depth research and careful planning before they could open a functional winery. Today, a few months after they were finally able to launch, the kiwi wine is available in the states of Assam and Arunachal Pradesh for 1,200 Indian Rupees (Php 921.75). Exporting the product to the rest of India is a problem that remains to be unsolved, however, given that the region has no airport and has landslide-prone roads.

Watch this video to learn more:

These ‘Gumshoe’ sneakers are made from recycled chewing gum
London installs pollution-absorbing ‘bench’ as effective as 275 trees
This guy makes working cameras from the most random things
Apparently, alcohol can help you speak foreign languages better
WATCH: 10-year coma prank served as a wake-up call to this drunk-driver