A screaming comes across the theater. There is a curious stirring in the air, necks craning and extending left, right and back in search of the source of noise heard just seconds before. There, in the middle of the sea of people, one rabid fan with a blinking crown raises a perfectly obtuse angle of an arm and points an accusing finger towards the stage, as if to say, “There, the culprit is right there!” With straining eyes, the audience follows the tip of the pointing finger, staring expectingly at the horizon beyond which lay — nothing. It was a false alarm.

From outside, a long and winding snake of a line zigzagged beyond the vicinity of the Kia Theatre in Araneta Center, Cubao, past the pedestrian lane and traffic lights to the block across in Gateway Mall as more and more people came in droves to see one thing: Fifth Harmony. In critical moments such as this, it takes immense skill for one to refrain from detonating after hours of waiting in line, only to be detained in the entrance minutes more by the necessary poking and searching of the security guard’s wooden stick. In such a moment, one discovers that patience is no longer a virtue nor a talent or art form, not anymore the inherent quality of all humanity, but a rare Nietzschean superpower granted to a few.

Such righteous impatience can only be brought out by the craze and mania of Fifth Harmony. This isn’t the first time the famed pop and RnB girl group had stepped into the country and brought fans into a frenzy, however. Just less than a year ago in April, the chart-topping group flew to the Philippines to perform in the metro as part of their Asian Tour. This March 6, the fervent wishes of their fans — who proudly call themselves the “Harmonizers” — were heeded once more as Fifth Harmony came back for the second time around, this time for their PSA Tour. 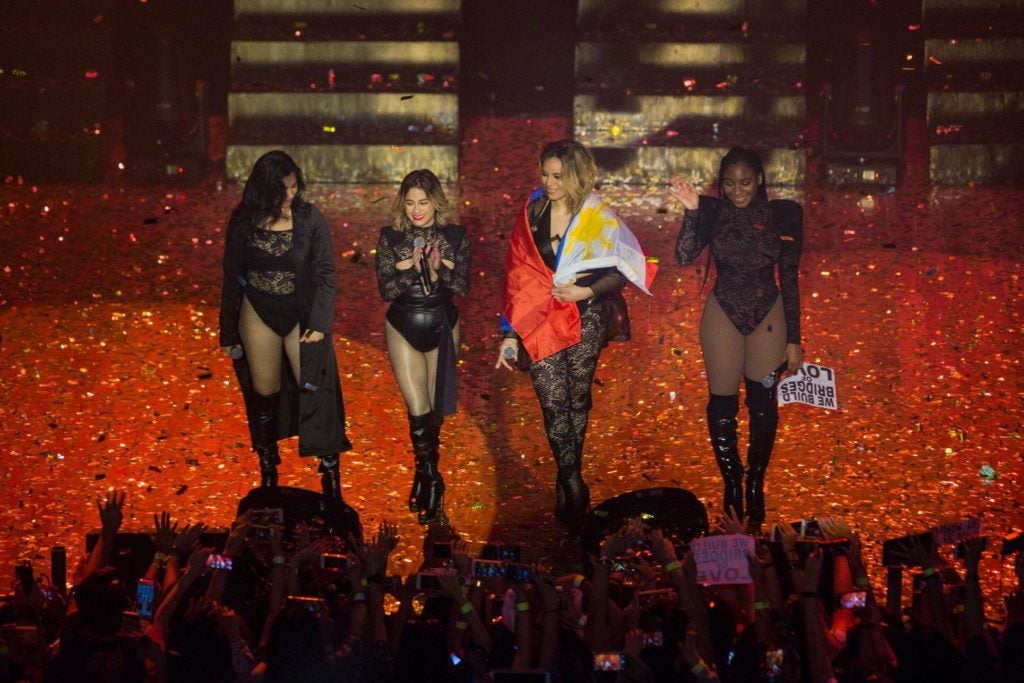 But whatever had been said about second comings should be momentarily set aside, as Fifth Harmony’s return did not materialize with the opening of the heavens nor with the sound of trumpets and angels singing, instead coming to the fore announced by the vicious gushing of the smoke machine and the frenetic wagging of electric blue and purple spotlights. From the umbra of the stage’s shadows, the foxy foursome — Dinah, Ally, Normani, and Lauren —  emerged clad in black lace and leather, fiercely met with the “Harmonizers” collective screams so hoarse it threatened to rip the epiglottis.

Truly an overcharged and ravenous crowd has no time for aperitifs. This was granted. Absent of any front acts, Fifth Harmony dove straight to the entree and offered a musical jambalaya to new and old “Harmonizers” alike, singing hit bops such as “Worth It” and“Bo$$”, from breakthrough album “Reflection” to the catchy and sultry “All In My Head”, “Work From Home” and “Down” from later albums “7/27”and “Fifth Harmony”.

The crowd was soon lost in the depths of a trance, so mesmerized it seems under Fifth Harmony’s spell that even the breaking down of the sound system every now and then left them unfazed. “Harmonizers” danced and sang along to each tune, every word, lilt and inflection burned into their minds like a litany, by rote, and their wildness tempered only by the occasional pacifying of the bouncers whose own tapping of the feet cannot be denied.

Amidst the manifold professions of “Mahal kita!” from the artists themselves, the concert eventually reached its culmination with the singing of their final song “Bridges” from latest self-named album “Fifth Harmony” released just last year. A hail of glimmering silver confetti erupted from the ceiling and a Philippine flag was flourished and waved from the stage.

“The world can be cold, we can’t let it divide us. There’s something inside us, a power that grows… Bridges, not walls,” the song went, nuanced and sobering in its lyricism.

Perhaps if the crowd stood still long enough, one would’ve heard clearly and perfectly understood. Or, perhaps, despite all their swaying and strutting to the beat, one is still able to keep a functioning listening ear. If there is one thing, and only one, to remember from Fifth Harmony’s rousing display of bravura, let it be this: Bridges not walls, the world can be cold, but we can’t. The message echoes in the ears — poignant, palpable, confronting — and lingers, lingers far beyond the theater walls.

Fifth Harmony gave us an unforgettable night, ‘cause baby, we’re worth it!

Filharmonic gets candid about Fifth Harmony, the Filipino fans, and their upcoming music