Kelly Marie Tran, the Vietnamese-American actress who plays Rose Tico in ‘The Last Jedi’ and the first woman of color to play a lead role in the entire franchise, has been subjected to sexist and racists comments online. Just last week, the character page for Rose on Wookiepedia, the Star Wars Wiki, was replaced with racial slurs. Read it in the screenshot below: 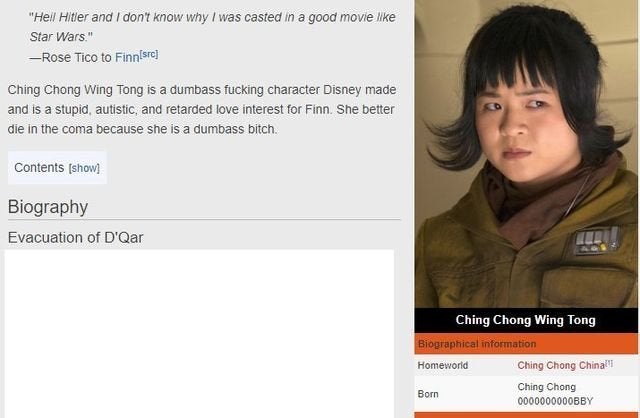 Her name was replaced with ‘Ching Chong Wing Tong’ and she was referred to as ‘stupid, autistic, and retarded’. The offensive text has since been taken down and the Rose Tico page is now closed off from further editing. FANDOM, the company that runs Wookiepedia, has also banned the person responsible for the vandalism from editing and using Wookiepedia and any other FANDOM wikis. They tweeted this statement after the incident:

Kelly Marie Tran is a treasure and it's a privilege to have her in the Star Wars family. Rose Tico is a wonderful addition to the Star Wars story. We're lucky to have them be part of this fandom.

Some people on Twitter have also posted offensive tweets about the actress on the platform, like this one: 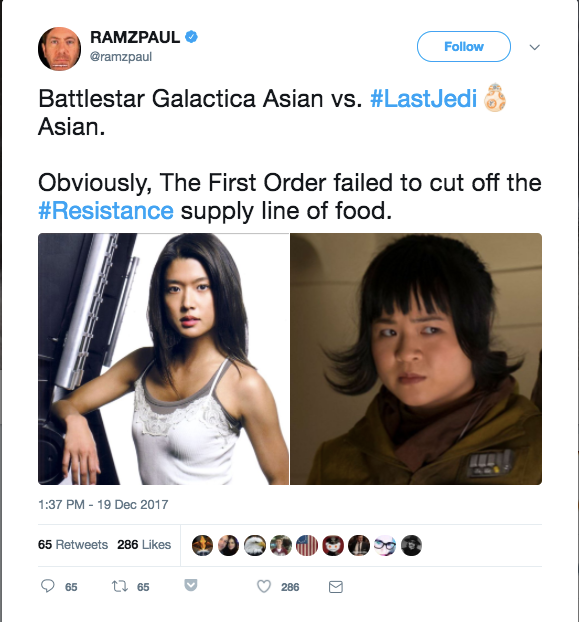 But fans quickly rose to her defense and tweeted about the importance of having a woman of color playing a major role in what is probably the biggest movie franchise:

Rose Tico is my favorite character in forever. Just the thought that her existence unapologetically gives literally millions of young Asian girls a Star Wars hero they can recognize makes me happier than I’ve been in a long, long time. 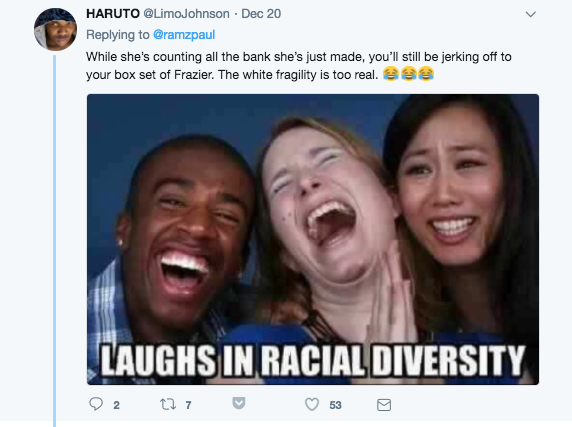 I cried reading this because I just love Kelly Marie Tran so much https://t.co/N1ShJy6yRp pic.twitter.com/wQX6siBamy

"To have someone like Rian write something that was so full and rich, and a complete human — I’ve never had that before. I don’t know that many people of color have that often." https://t.co/GvIyFFQTtc pic.twitter.com/q8gcMcWn4Z

This shit is the thing that pisses me off. Don’t like Rose? You can have that opinion. But don’t go on to Kelly Marie Tran’s instagram and talk about you think she is the worst character. Kelly has been nothing but a goddamn ray of sunshine and she doesn’t deserve this shit pic.twitter.com/EO5WmhzlmQ

This outburst of racist and sexist opinions about Kelly Marie Tran being included in the cast of Star Wars is just one of the many criticisms The Last Jedi received from a specific group of fans– people who are pissed because they believe that the movie ruined the franchise with “leftist propaganda” and “SJW (Social Justice Warrior) sentiments”.

What these people fail to realize is that at its core, Star Wars has always been about a group of people from all walks of life (and all corners of the galaxy) rebelling against tyrannical empires. And Rose Tico, the maintenance worker who came from a poor planet ravaged by the First Order and who rose from her humble roots to “punch a hole” into the oppressive system that has robbed her of everything she loves only reflects this. The addition of an Asian actress to a main cast already more diverse than its predecessors only reflects this.

star wars fanboys: *have been fans of a film saga about the constant struggle of the oppressed against a tyrannical empire/order/faction since 1977*
also star wars fanboys: what the fuck is this leftist propaganda

Look, Certain Subset of Star Wars fans: Star Wars is about the same stuff it was when you were a kid. It's not the franchise's fault you grew up to join the Empire.