The number 0917 is perhaps Globe’s most iconic mobile prefix, and rightfully so. It was the first number prefix used by the telecom giant and it also happens to correspond to the calendar date September 17. This year, Globe celebrates the occasion by giving back to its loyal customers with 0917 Day. This special event was held last Saturday outside Globe’s flagship ICONIC Store at the Bonifacio High Street Central. Open to the public, the happening was somewhat of a fairground affair: engrossing booths that showcased Globe’s new partners and innovations, Globe brand ambassadors giving free hugs, and loads of entertainment both projected and performed live with electrifying acts. 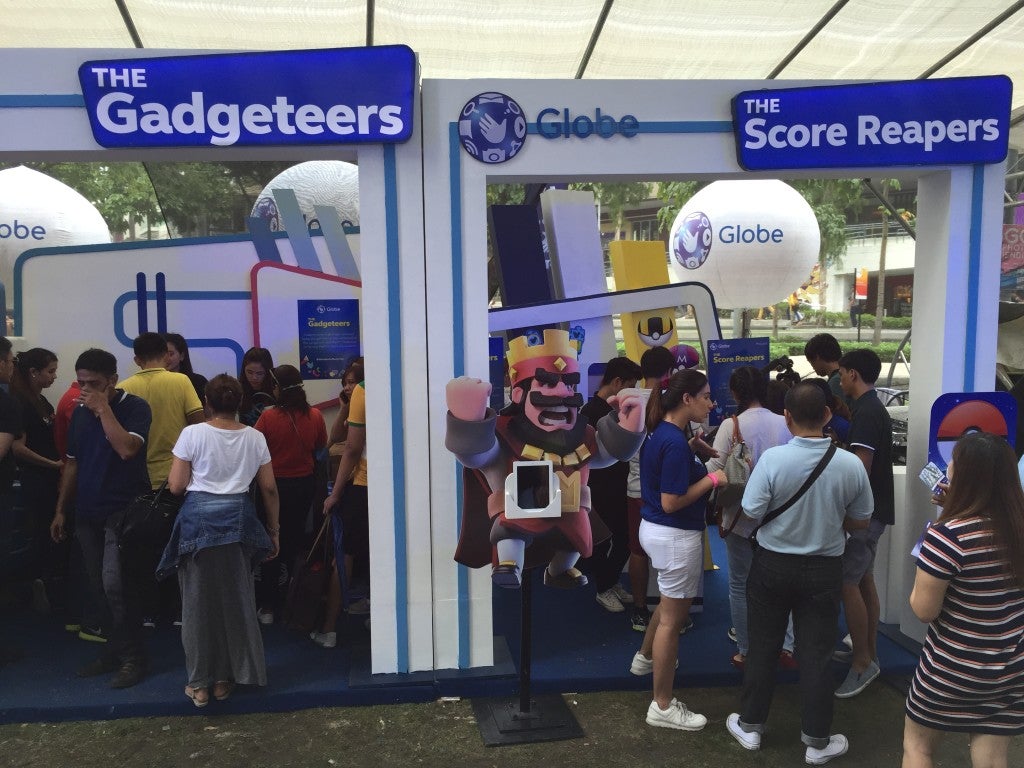 Some of the booths during Globe’s 917 Day.

Here’s a rundown of seven things that made the day memorable:

Stranger Things is a bonafide hit 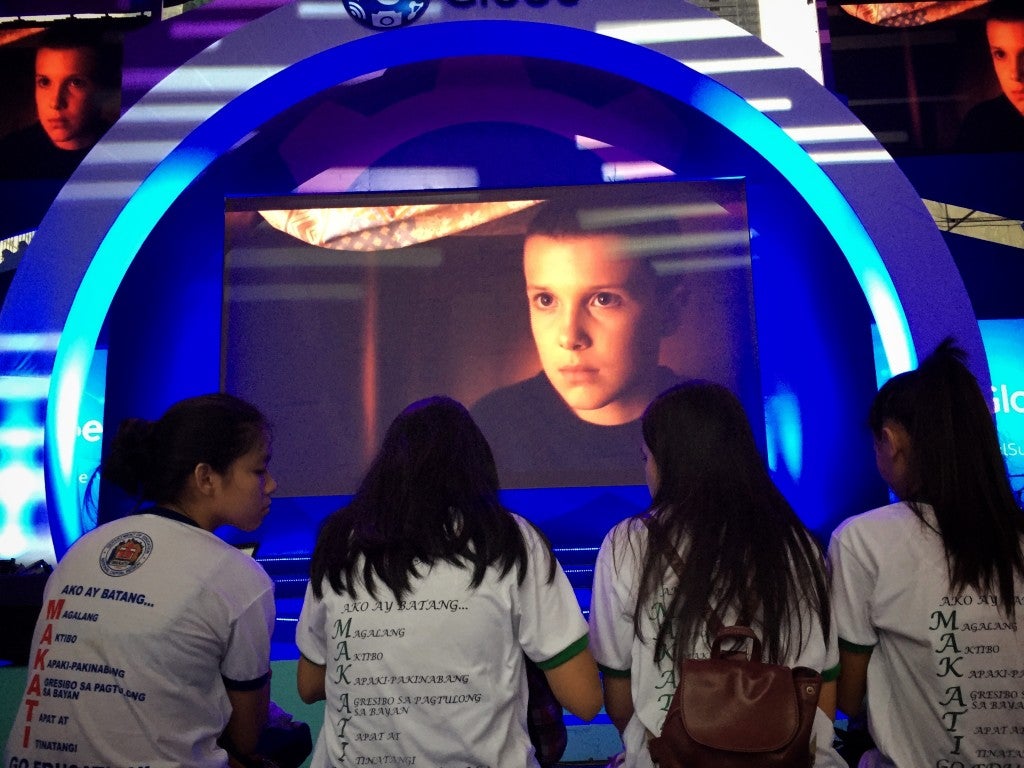 The first two episodes of the show were screened for the crowd in the afternoon.

If you haven’t yet seen the Netflix original, Stranger Things, then get yourself a Globe Broadband plan to have the horror series streaming into your home. The first two episodes of the show were screened for the crowd in the afternoon, many of whom were already superfans wanting to relive its thrills. The first public screening in the world, it was just one of the many Netflix events that day, which also included “Flick Street,” an interactive experience showcase of Netflix’ most popular shows that extended from Bonifacio High Street Central all the way to Serendra.

Free Pokecoins for the first 917 to make the Switch 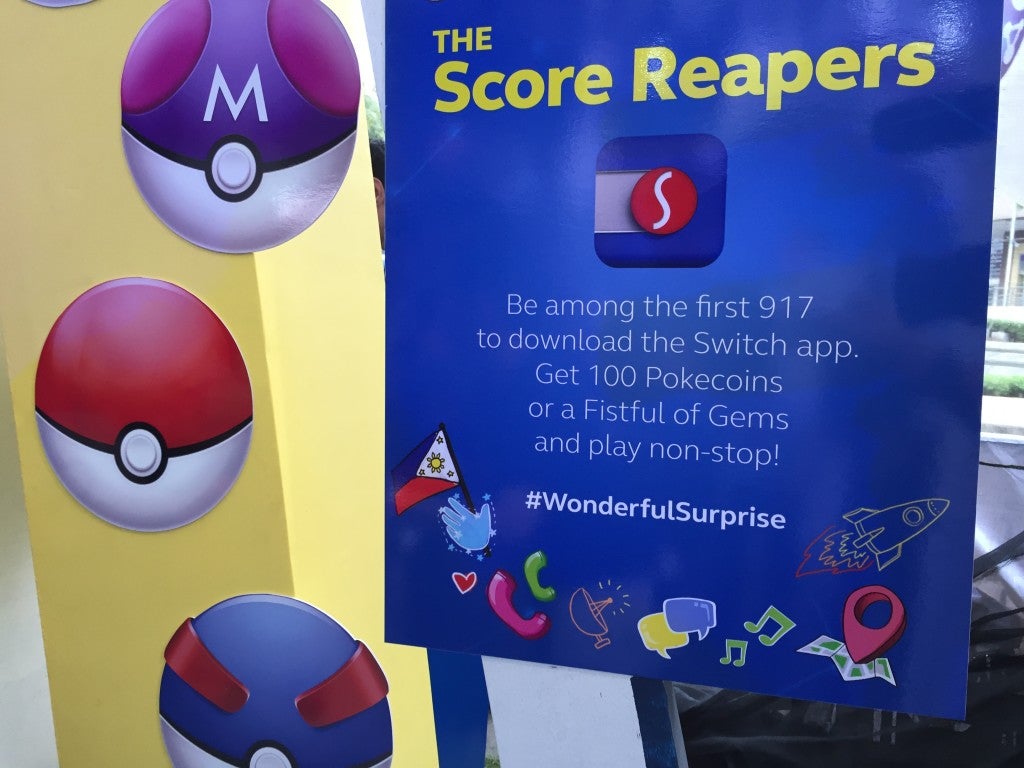 The previous evening at the Wonderful World With Globe XI, Globe Senior Adviser for Consumer Business Dan Horan hinted that Globe would be working with Niantic’s Pokemon Go to bring Globe subscribers exclusive Pokemon, Pokegyms and other Pokemon Go promos in the next few weeks. The first of these initiatives launched on 0917 Day, with free Pokecoins for the first 917 Globe subscribers to install Globe’s Switch app and register at the Score Reapers Booth. Lures were also dropped in the various Pokestops in the vicinity, attracting lots of Pokemon Go trainers to the event.

If you’ve ever wanted to give back to the community by funding a good idea, then Kiva just might be the channel you’re looking for. The San Francisco-based nonprofit had a booth at 0917 Day where potential donors could find out about the program. Kiva is devoted to poverty alleviation, helping fund community businesses, foundations, cooperatives and scholarships through loans and donations. Globe helps out by facilitating donations via GCash. Beneficiaries include such groups as the Negros Women for Tomorrow Foundation and Maglaum Multipurpose Cooperative.

Dial 0917 for a street style makeover 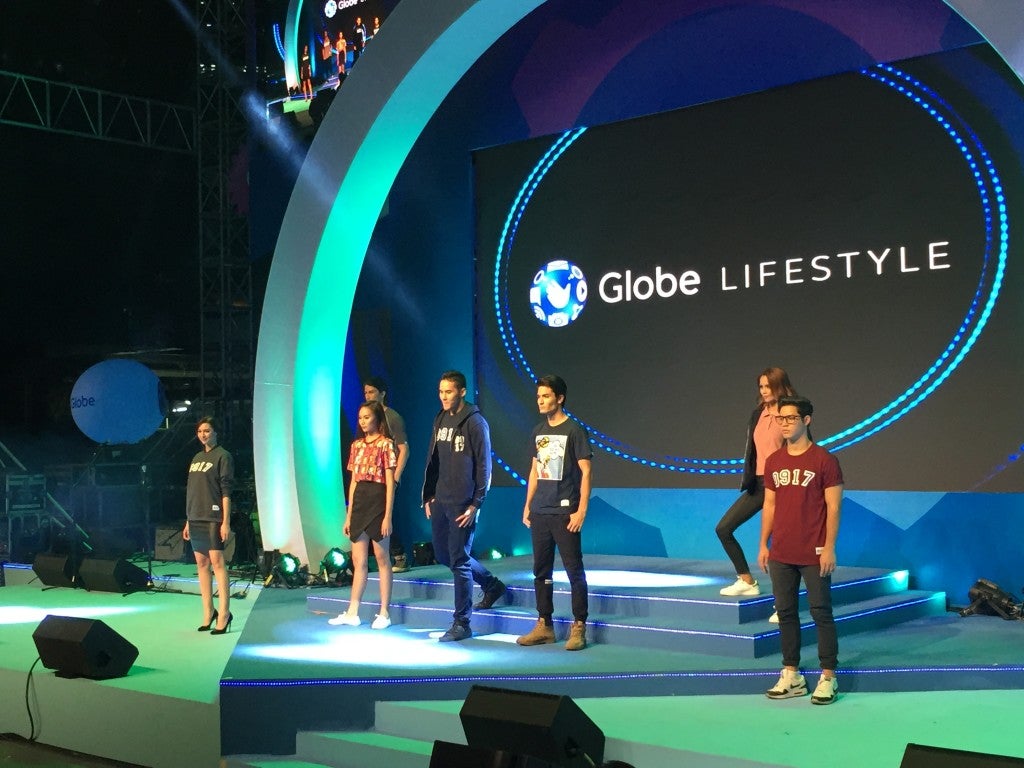 Show off your street style with the 0917 Apparel.

Capitalizing on its iconic prefix, Globe unveiled its 0917 Apparel collection with a quick runway show that revealed the brand’s various tops and hoodies. Featuring the creative use of typography and prints that revolve around keeping in touch, the clothes are smart and casual, exuding a very hip urban feel. On special for that day, 0917 Apparel was available at a sweet 50 percent discount. 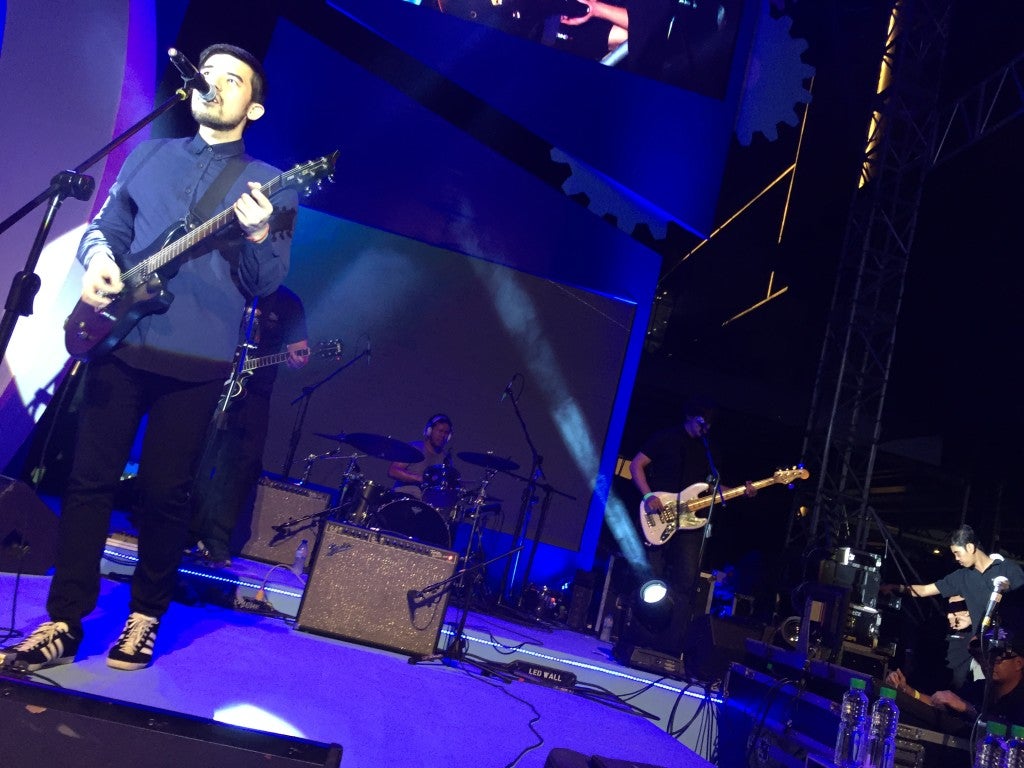 You may stream your music all you want but there’s just no substitute for a live music performance. Globe LIVE! understands this, the power, raw energy and one-of-a-kind experience when you watch a band, orchestra, musical or singer, and it promises to deliver just that to the public through its Sessions series. Pogi rock progenitors Hale kicked off the night, including a performance of their new single “You are Nothing,” followed by Miro Valera, Jason Fernandez, Norby David, Miggy Chavez and rock superstar Basti Artadi. The individual performers then participated in an epic jam, singing songs like The Beatles’ “Come Together” and Green Day’s “Basket Case.”

Basti Artadi showed us why he’s a rock legend 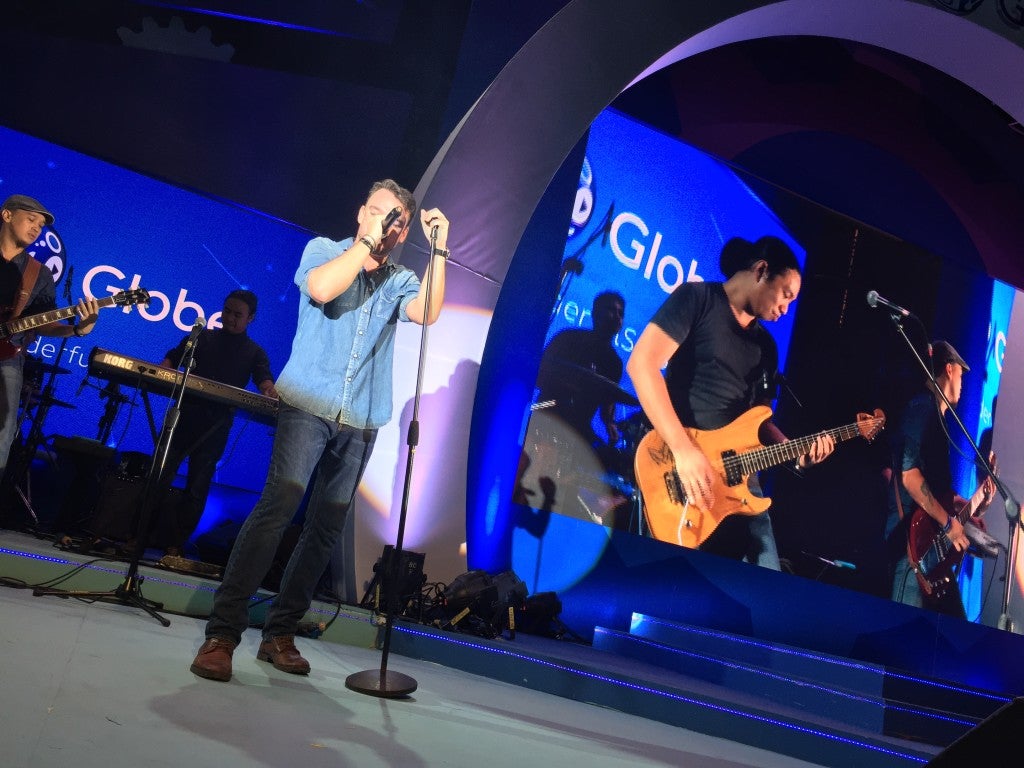 Basti Artadi kicked things off with an amped up cover of The Police’s “Message In a Bottle.” He also played classic hits like “Halik ni Hudas.”

The young ones in the audience may not have been so familiar with him at the start of his set but Basti Artadi certainly made an incredible lasting impression that night, kicking off with an amped up cover of The Police’s “Message In a Bottle,” before segueing into his classic hits like “Halik ni Hudas”. New fans were created that night while older Wolfgang listeners relived the early aughts headbanging to Artadi’s thunderous hard rock growls. 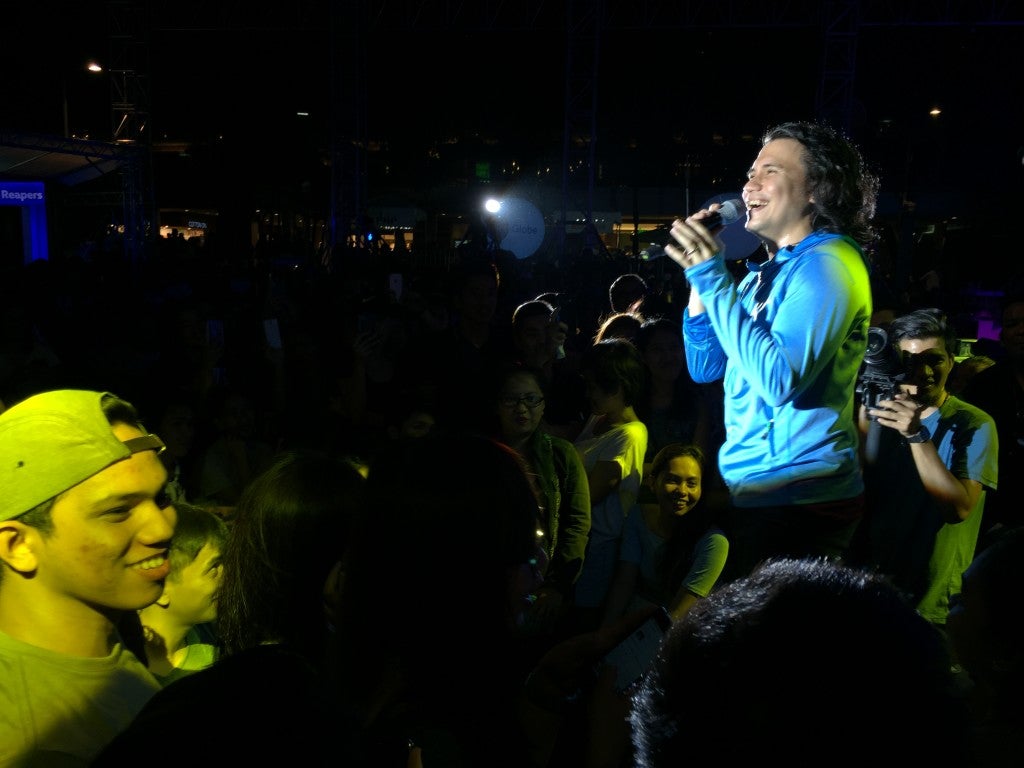 Yael Yuzon sings the entire set standing on a bench surrounded by a throng of fans.

Filipinos like to laugh, even when they’re rocking out, and Sponge Cola was the perfect band to end the evening. Vocalist Yael Yuzon was hella funnier than usual, singing the entire set standing on a bench surrounded by a throng of fans. His spiels would break out into spoken word songs before jumping into the band’s standards, like “Bitiw” and “Kay Tagal Kitang Hinintay.” Entertaining was an understatement, and their live act is what has made them a crowd favorite for so long.