After yesterday’s lay day due to unfavourable waves conditions, the sixth and final day of the first leg of the Philippine Surfing Championship Tour was a blast, as we went through Semifinals and Finals. Cloud 9 offered two-foot-high waveswith a bit of a long waiting time in between sets, which made it a bit tricky for our surfers.

Nonetheless, the finalists performed an excellent show with the crowd erupting cheers that can be heard all the way from Jacking Horse. The remaining surfers in the finals were all from Siargao except Jomarie Ebueza and Jay-r Esquivel, both proudly representing La Union.

Starting with the Juniors semifinals, the first heat was dominated by Gabriel Lerog, last year’s Champion of Siargao leg, as he took the lead in the first minutes. The second place was a battle between Lemar Delamide and Jomarie Ebueza. Jomarie needed a 4.60 to come second and the promising 17 years-old surfer scored a slight 4.80 that made him achieve that spot in the final. 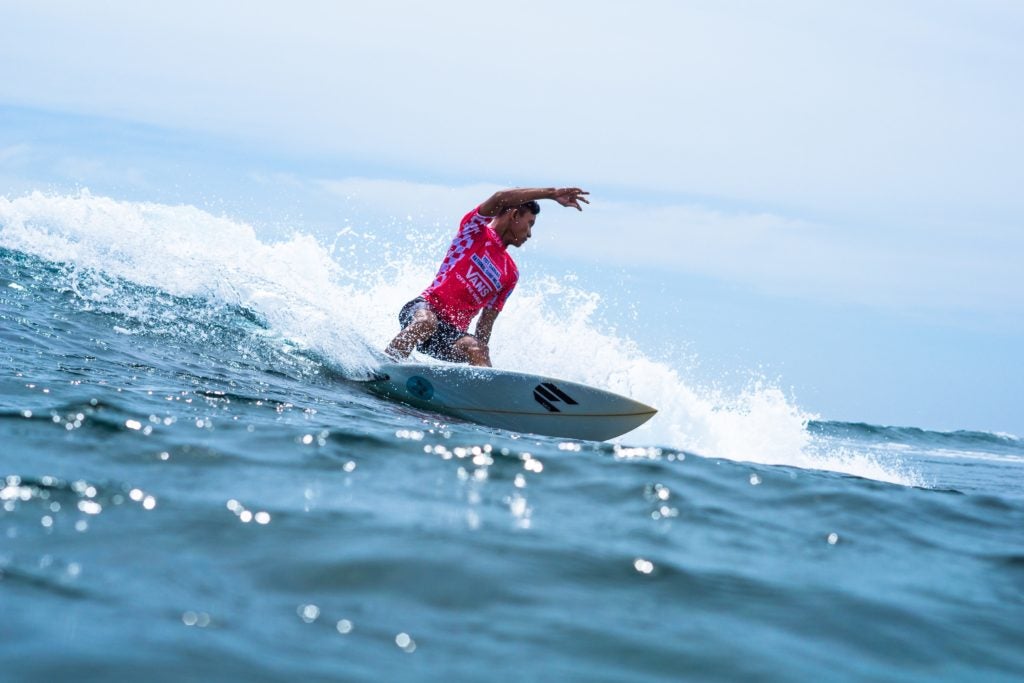 “I was quite intimidated to surf with the locals and to compete for the first time in Cloud 9 but I practised a lot. Cloud 9 is a beautiful wave”, said Jomarie content with his result. During this heat, we saw true solid and quality surfing by these young athletes, giving both the spectators and judges tons of air reverses and other tricks. 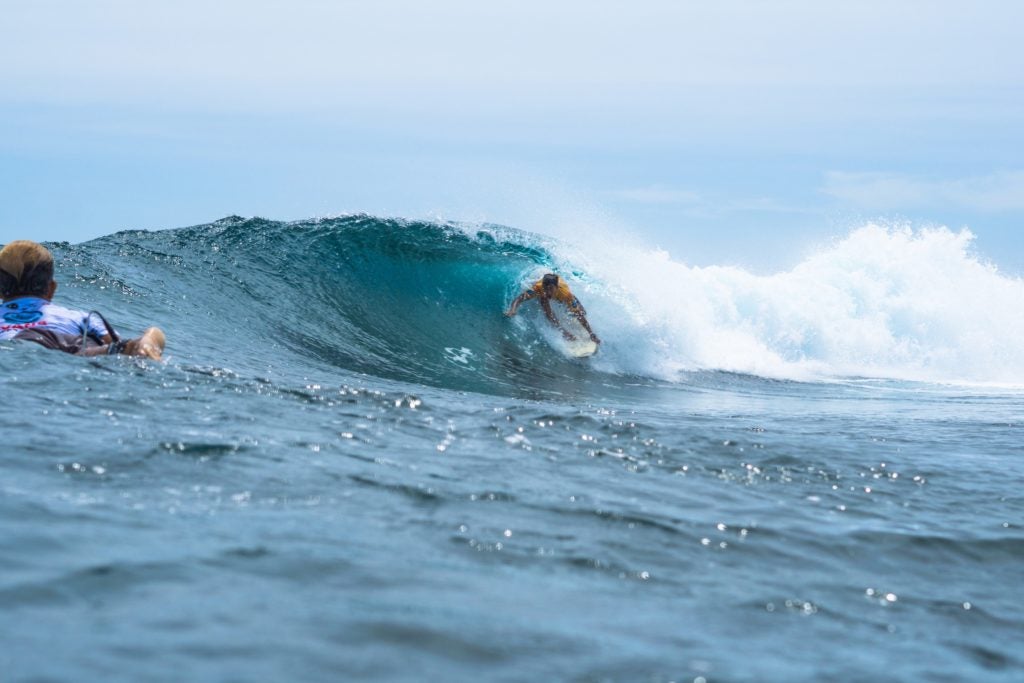 During the second heat of the semifinals, we saw a lot of situation changes during the first fifteen minutes. Later, Marven Delamide scored a 5.10 followed by a 5.60 that made him remain in first position for the rest of the heat. John Carlos Noguera, took that well-deserved second place. 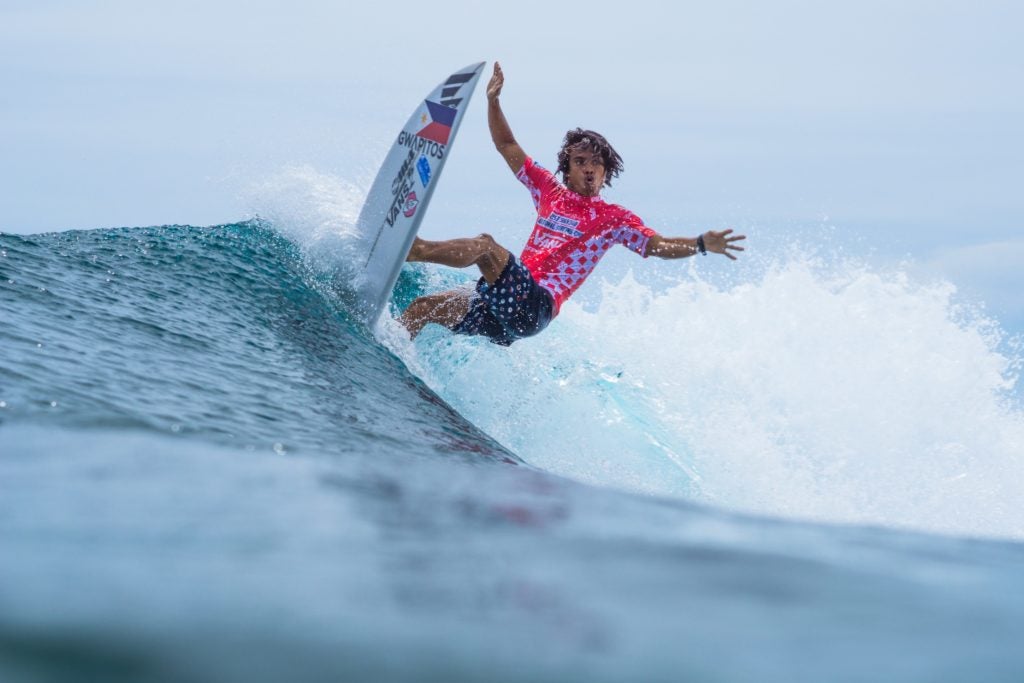 By the time, John Mark “Marama” Tokong and Jay-r Esquivel sat on the peak ready for their semifinal, the ocean took a break. The judges had to call a heat restart after 10 minutes because the competitors did not take a single wave. With 25 minutes on the clock again, La Union’s Esquivel took off and scored a 5, chased by the Siarganon Tokong who scored a 6, with an aerial 360.

Both teammates and good friends acted with perseverance and were very cautious on the selection of the waves. Tokong surprised us again with another “superman” that made him sit in the first place. “When I found out that I was going to compete with Marama in semis, my strategy was to go for lefts waves and do aerials because I was rewarded with good points from that on the other round”, explained the goofy-footer. Despite losing the championship title in this leg, the surfer from La Union is confident to be in the finals in Samar as the waves there are a goofy-footer’s paradise. 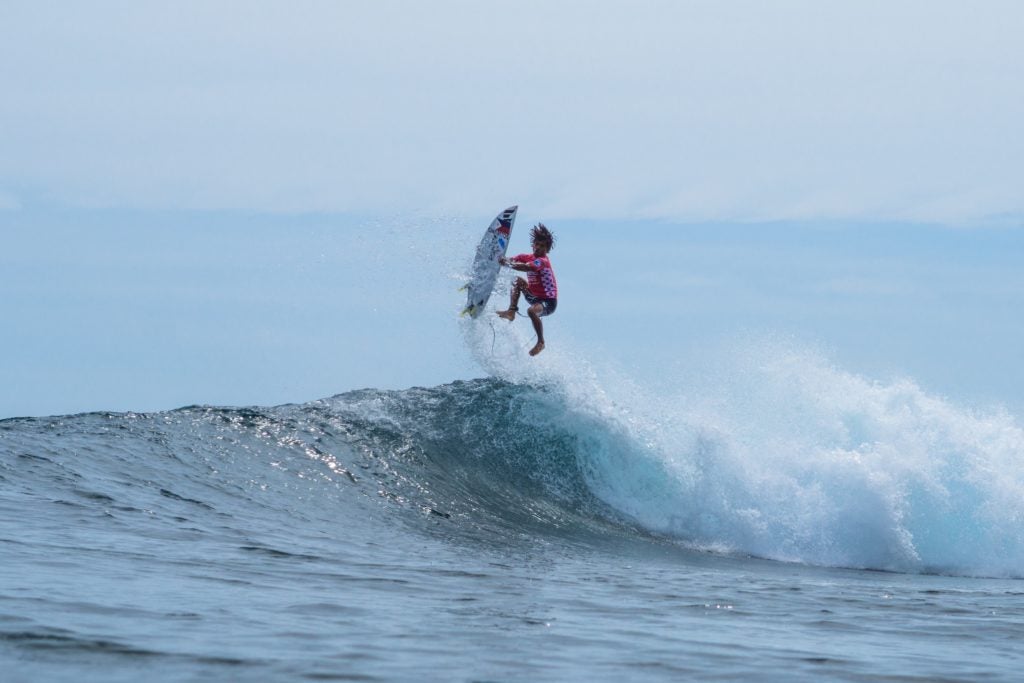 After the triumph of Tokong, it was the turn for Edito “Piso” Alcala Jr and Philmar Alipayo, both former PSCT champions. In one instance during the 25-minute heat, the unstoppable Alcala performed an air reverse on the most critical part of the wave, the lip, followed by another turn and before ending the ride, adding a few more. This was, indeed, the most critical turn of the entire competition that made him scored an 8 on his first wave.

Despite the big advantage, Alipayo wasn’t fazed and answered back by taking some massive aerial reverses which gave him just 0.25 points of difference between Alcala and a spot in the finals. The surfers did not take more waves and as the horn sound, Alcala came back to the tower victorious and with a well-deserved spot in the final.

It was time for the finals of the 21st National Siargao Surfing Cup. Juniors Division Final was full of changes. Gabriel Lerog dominated the heat followed by Jomarie Ebueza. With only seven minutes on the clock, Marven who was sitting in third place by then, scored a 6, the highest score of the final, and became the Junior Champion of the 21st National Surfing Cup. His fellow friends and brother ran to congratulate him and lifted him up on the way back to the tower. 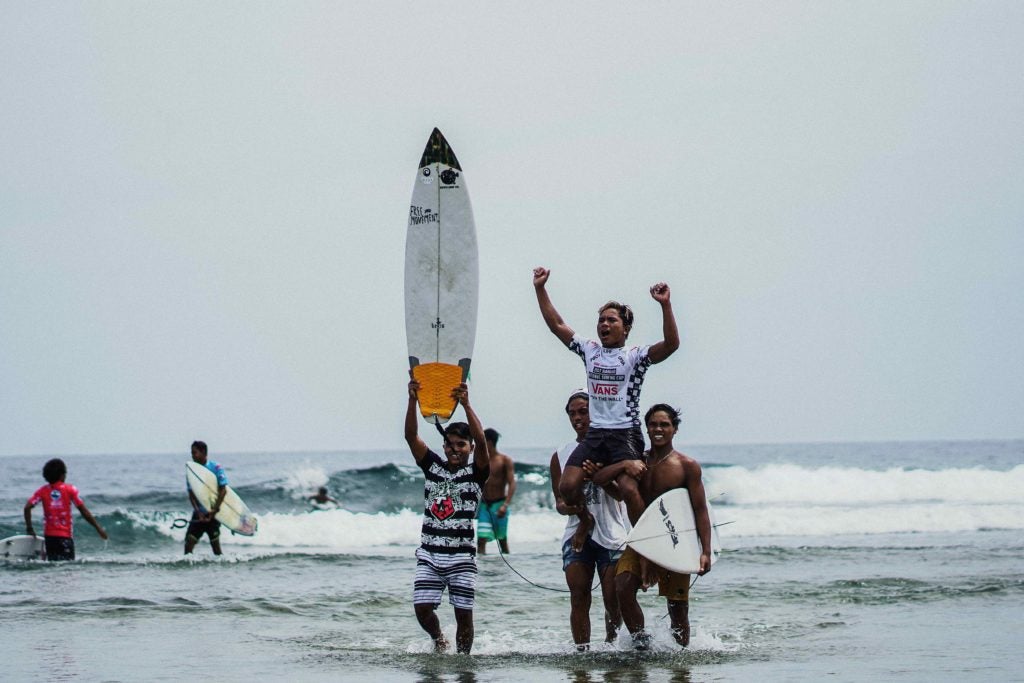 Delamide has competed in previous legs of the PSCT, although never made it this far. This is also his biggest prize bringing home PHP 20,000. This same year, he also showed great progress by making it to the finals of recently concluded Cloud 9 Masters Competition last June.

The two Cloud 9 masters, John Mark Tokong and Piso Alcala encountered each other again in the finals. Since 2018, we’ve been seeing these two Siarganons battle it out for the championship. Both equally talented and hardworking, we know everything is possible when these are in the water.

It was a slow start in the finals as the surfers were very picky with the selection of waves. Tokong started with 4.50 points taking the lead but Alcala scored 6.15 with a 360 aerial, moving into first place. Tokong tried another superman but landed unsuccessfully. Alcala continued with his smooth turns scoring another 5.90, having a total score of 12.05, leaving Tokong 1.30 points behind. 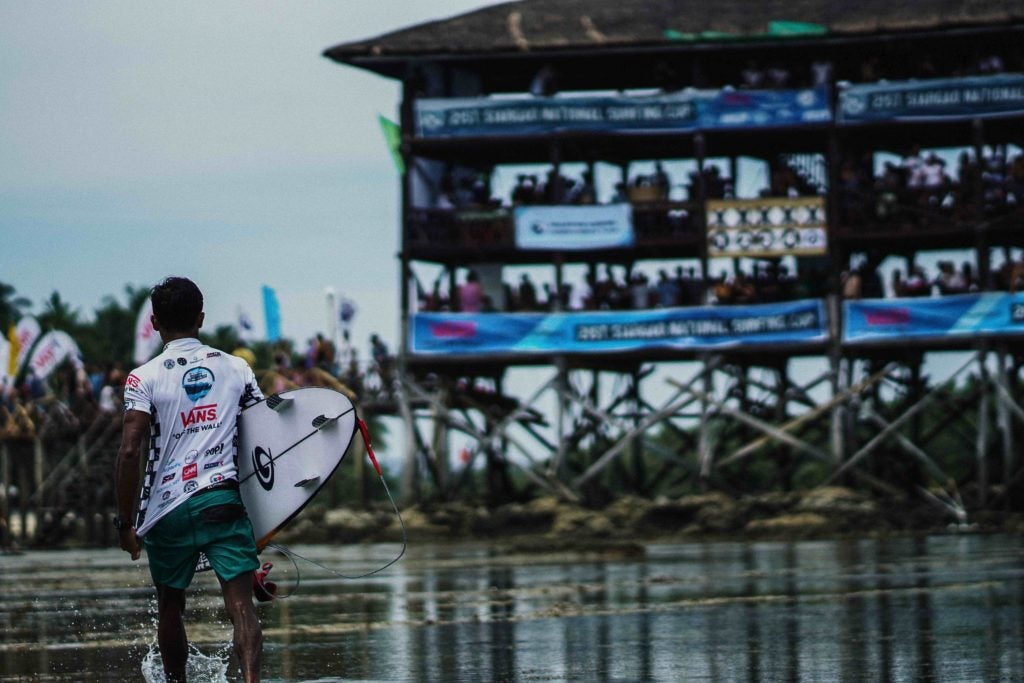 With 20 seconds left, a confident Alcala lifted his arms in the air as the new champion. Free surfers paddled out in the water to congratulate the 21st National Siargao Surfing Cup Men’s Open Champion, taking home PHP 80,000. Friends, fans and sponsors waited for him at the tower to congratulate him and Tokong.

The 21st National Siargao Surfing Cup has been an epic, five days of pure and exciting surf with new and old faces from all around the country.