The annual Fête De La Musique is fast approaching and it continues to grow in Poblacion, Makati City which is becoming a melting pot for live music every year. And El Chante MNL, formerly known as Johnnie Walker House, is sure to become the new space around the block for music such as hip-hop, R&B, and house music every week as it gives home to this year’s Fête De La Musique: “Not Bad” Cypher Stage.

As one of the hiphop-themed pocket stages of Fête PH, Fête De La Musique: “Not Bad” Cypher Stage invited all elements of hiphop to bring its A-game as the first-ever stage of its kind: from dance to rap to turntablism to graffiti, this stage will showcase everything you need to make you dance and shout “Not bad!” because everyone else is encouraged to dance in this party! 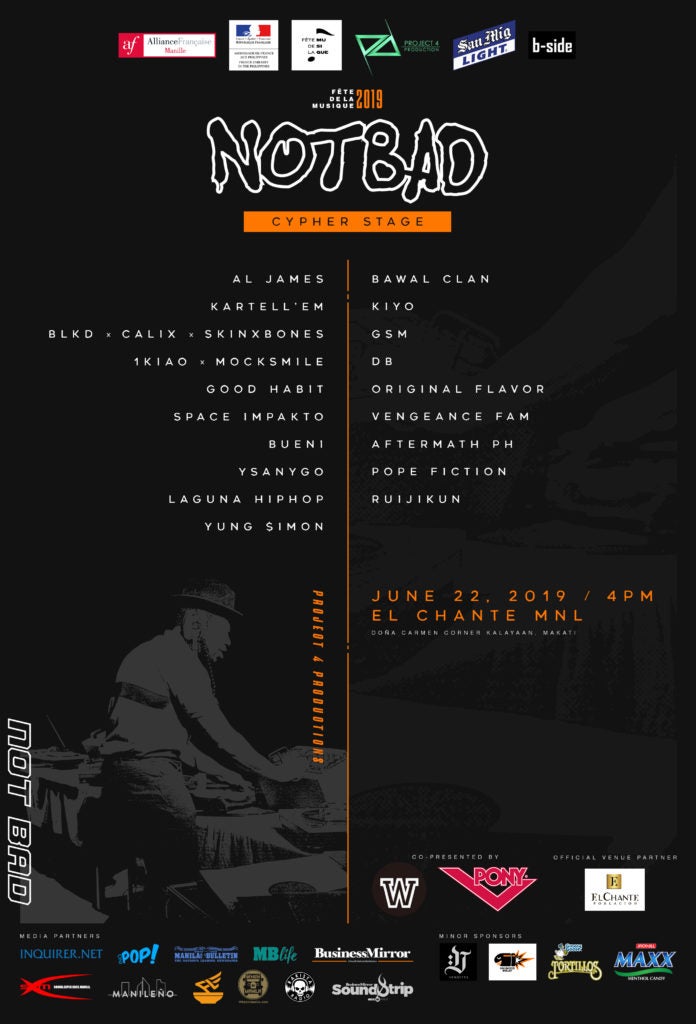 For this year’s performers, Fête De La Musique: “Not Bad” Cypher Stage brought together some of the most exciting acts from the local hiphop scene like Al James, Kiyo, DB, Bueni, Ysanygo, BLKD x Calix x skinxbones, Bawal Clan, and Kartell’em together with dance crews such as Original Flavor, Vengeance Fam, and Aftermath and DJs such as Pope Fiction and Ruiijikun. There are many more surprise acts that are coming your way in this massive stage!

Happening in time for Fête De La Musique’s 25th Anniversary, you can visit this pocket stage for free on June 22, Saturday, from 4 PM to 4 AM, at El Chante MNL bar located at the 2nd floor of Makati Sports Bar in Kalayaan Avenue cor. Doña Carmen Street, Poblacion, Makati City.

But if you also want to get that rock music fix, the Fête De La Musique: Rock & Roll Stage of Rough Stuff Entertainment is right downstairs at the Makati Sports Bar headlined by rock n’ roll legends Kjwan, Razorback, and Basti Artadi.