Thor, Black Widow, Captain America, and Hulk are some of the characters that you will see in the latest Marvel movie, “The Avengers: Endgame,” which premiered last April 24, 2019, in Philippine cinemas. Thousands of fans waited for a year to watch the American superhero film, however, “spoilers” of the important moments irked other fans who haven’t seen the movie yet. Apparently, netizens took this issue really seriously and wanted to remain spoiler-free by using the #DontSpoilTheEndgame.

Here are some of the netizens’ posts about the trending “Don’t Spoil The Endgame” reminder:

me @ anyone who spoils endgame #DontSpoilTheEndgamepic.twitter.com/PZFKjfnxfX

So yeah this guy posted an #Endgame spoiler on YouTube, and even though I've seen it twice… I did this for everyone who hasn't…#DontSpoilTheEndgame pic.twitter.com/U9FULtK3Oh

Spoilers without context #AvengersEndgame DONT DO IT PEOPLE THESE STILL ARE SPOILERS. IF NOT FOR ANYBODY , THINK OF HIM AND DONT SHARE SUCH THINGS . DON'T DO IT !!!!! #DontSpoilTheEndgame pic.twitter.com/SZAY1fzSTo

Aside from this massive hype, Twitter took time to issue cute emojis for each Marvel characters in the “Avengers: Endgame”. There are 40 Avengers emojis created by @100Soft such as Black Panther, Captain America, Hawkeye, Ironman, Groot, KORG, Nebula, Rocket Racoon, and Thanos. These emojis will automatically appear next to the character’s name in the hashtag. 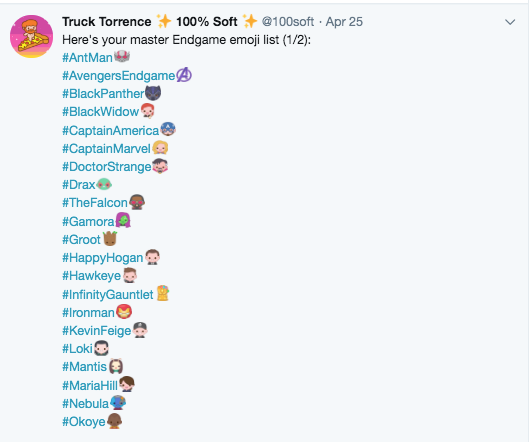 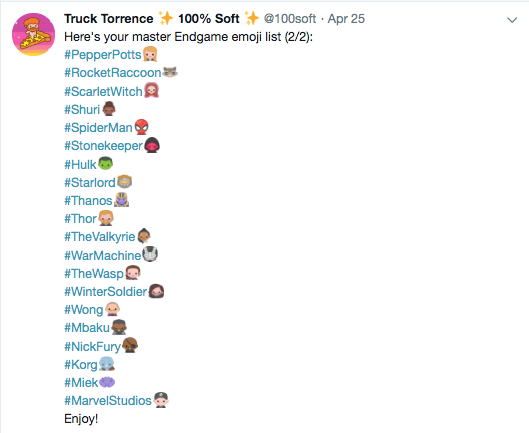